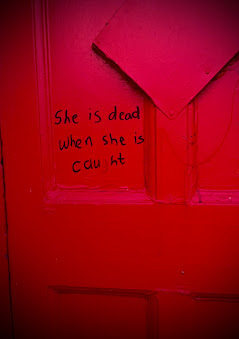 At first you think, maybe it's an emotional outburst from a young woman who is frightened of entrapment--perhaps a deep fear or romantic entanglement.

Yes.  To be caught is to die.  Profound--Even if it is written on a door.  It's a poetry jamb.  Or maybe a door slam.

But then, you think, no, it's more likely a veiled prediction.  A promise.  A passive-aggressive curse from a spotty teen directed at the object of his unrequited desire.  He knows he can't say "I will kill her when I catch her" because if he does, and her father happens to see it, he might have his tiny arms torn off.  The end of a promising graffiti career.

It's very much an Irish thing.  The idea of justice delivered--by somebody else, a powerful entity, a Deus ex machina, as the chap with the Magic Marker might say, swooping down and smiting the faithless lover.

But why is the 'g' in 'caught' almost invisible?  It's possible he wrote C-A-U... and then paused, tongue stuck out the side of his mouth.   The ink drying on the felt tip.  Was he thinking of Tom Wolf's quote about writer's block in the Paris Review?

"the fear you cannot do what you’ve announced... or else the fear that it isn’t worth doing."

Visiting in the Time of Covid

Covid-19 and dementia: ‘My father studies me, as if trying to put together a difficult jigsaw’ 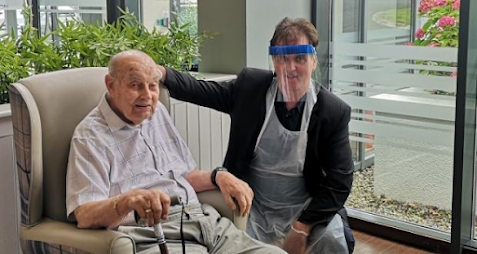 When I arrive at the nursing home, I’m fitted out with a visor, latex gloves and a surgical apron. Sitting in a wing-backed chair in the lobby, my father tilts his head and studies me, as if trying to put together a difficult jigsaw.

“Norman?” He says, mistaking me for his older brother who died in 2006.

“The very same,” I reply. It’s easier this way.

These visits are awkward: The paraphernalia, the social distancing and the time limit of 45 minutes, but at least we get to see each other. For several months, there was no visiting at all.

He turns to follow my gaze, past the shrubbery blown flat in the stiff October breeze. His eyes alight on a 2018 Mercedes SUV.

I agree, and when he asks if it’s nice to drive, I say, “you can’t beat German engineering.” This means I’m only telling half-a-lie because my car, the 2006 VW Golf, is parked just on the other side of the fancy Mercedes.

He still has an eye for a good car. As a travelling salesman in the 1960s and ’70s, he roared around the countryside in a series of big British automobiles that looked like Edwardian furniture on wheels. Along the way, a thousand hitchhikers jumped into the passenger seat: ruffians and scallywags, old women with heavy shopping bags, young girls on the run from men who were too fond of the bottle and too liberal with the belt. 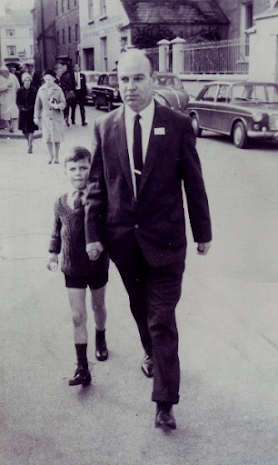 At 14 years of age, I learned to drive his Riley Riviera. “Keep her above 80 miles per hour,” he would say, “if you go any slower, I’ll get out and walk.” The countryside became a blur of green hedges, white lines and petrified pedestrians. When asked about his need for speed, the reply was always the same. “You have to make time.”

Now, at 94 years of age, in this bright, fresh lobby, it looks as if he has made more time than a man can possibly spend.

“How are they all keeping?” he asks, referring to the seven siblings who are long gone. I tell him that everybody is fine, “Mary, Betty, the twins, all great,” but then he catches me off guard. “And my father?” he asks.

His father fought at the battle of the Somme, survived German phosgene gas attacks, the Spanish flu and, later, a caretaking job in a TB sanatorium. He probably never owned any PPE. My hands are getting sticky inside the latex gloves and the visor is steaming up.

I nod and echo his words. Outside, a heavy cloud sits like a sack of coal on the hump of the Blackstairs Mountains. The sky dumps rain on the car park, and I’m wondering if I wound up the windows. Meanwhile, the Mercedes sparkles in the downpour.

A woman in a blue uniform brings my father a cup of tea and a biscuit. She pats his shoulder and teases him. “Are you behaving yourself, John?” He laughs, and a powerful gust of wind pushes open the inner doors to the lobby. The outer doors remain steadfast; they can only be released with a four-digit number, and to a dementia sufferer, this might as well be the DaVinci Code.

In any case, my father expresses no desire to leave the nursing home. As far as he’s aware, it’s a very plush hotel. “This is a great place,” he says, “you should check in for a few nights, there’s plenty of room.” I tell him I will give it some thought, but secretly, I examine my memories to make sure they’re intact. No blank spots in the middle nor hazy spaces at the edges. I’m almost certain I wound up the windows.

When our 45 minutes is up, the nurse comes to relieve me of the visor, gloves and apron. “Say goodbye to Norman,” she says, and I’m unsure if she’s playing along with the name game, or if she actually thinks I am my father’s elder brother – I see a mirror but decide not to look in it.

My father gives me a wave and heads for a room where somebody sings Michael Row the Boat Ashore, and I know if I stick around I’ll hear his rendition of Lili Marlene, but I must go. Hit the road. Make time.

With the recent increase in the R-number and the rise in community transmission, there is a very real possibility that visiting will once again be curtailed*. We may be allowed to come and wave through the windows, but even that is not guaranteed. And it might prove unsettling for the residents.

In the car park, the rain continues, but I’m happy to see my windows are firmly shut. I look at the large, glistening vehicle parked beside me, and I’m reminded of that old screenwriter’s joke: “In Hollywood, nobody ever asks, ‘does that Mercedes belong to the writer?’”
*Since the date of writing, the nursing homes have been closed to visitors, except on compassionate grounds.
Barry McKinley is the author of A Ton of Malice and Almost Home