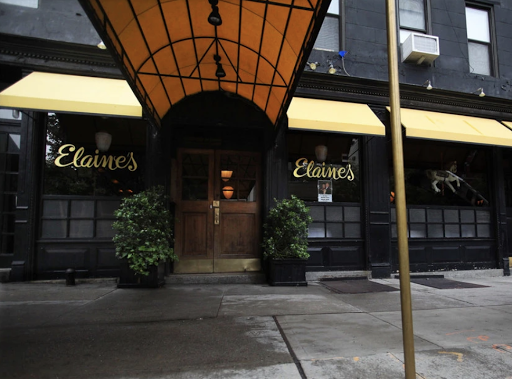 Just Came across this Diary entry from August, 10 years ago:

Elaine was not a particularly nice woman, but her bar was a good place to hang out if you liked looking at people. Beautiful people. Rich people. Famous people. I once stood beside Al Pacino at the urinals. Then a toilet flushed, and Alec Baldwin stepped out of the cramped cubicle. The two men nodded at one other. I nodded at them; they nodded at me. We offered each other first use of the washbasin. Alec went first.

Elaine Kaufman looked like a haystack squeezed into a body bag.  She died recently, and now the bar is gone. I was the guy that Alex the bartender (yes, another Al) used to call 'Irish.' I was the construction worker with the notebook who appeared to be writing about the writers. The guy who always paid for his martinis with hundred dollar bills. It started out as a jest and ended up, when the recession started to bite, as a routine that was hard to sustain.

I took my last drink in Elaines, at least it was one of my last drinks because I don't really remember a whole lot about what happened in the early morning hours of new years day, 2003.  I hopped around a few different places that night, rolling like a pinball between bouncers. I said farewell in Dorrians on the upper East side and Dublin House on the West. Revival in Harlem and The Scratcher in the East Village. I was done. I wasn't coming back, but there wasn't a bartender in the city who believed me.

I miss the red wine with steak in the Four Seasons, I miss the frosty mugs of Becks in the Aztec on 9th street. I miss the blue martinis in Revival. Twenty-five dollar cocktails in the Rainbow Room.  Pabst beer with pastrami on rye in Katz's...

For more than thirty years, booze was everywhere, and now it is nowhere at all.